Members have been invited to join in the ZOOM 'live' painting sessions at specific times on specific days with an image, usually a landscape, selected by one of the members. We then paint, sketch, draw, sculpt etc etc the chosen image. These 'live' works can then be displayed on this webpage. Artists may crop or amend the image in any way they choose.

However.....to allow members who may not be able to join in 'live' at that exact time, the image has been emailed to everyone so they can do their own version of the scene that week. Below is the first image chosen, and here are the results of both the 'live' session (Friday 30th October) and any others done that week...... 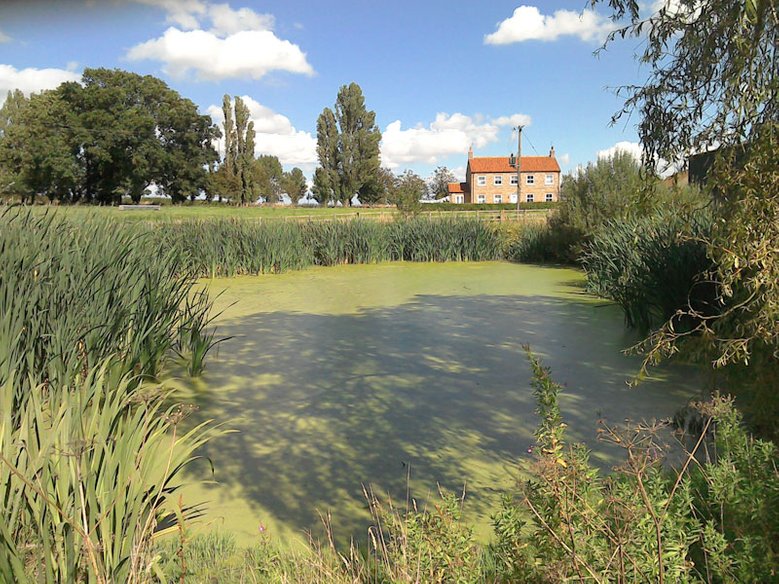 So...that was the starting image above, and eight of us logged onto Zoom and did our own thing during the two hour session. Six paintings were produced, Jude Howe worked on a fused glass project, and I dabbled with three 'art apps' on my iPad.

The first to upload his painting was Phil Hargreaves.........and here are the contributions from the 'live' session first, followed by the artwork done by other members not online that morning.

PHIL:     "I pretty much stuck with Steve's photo as I thought the composition was already about right. Last night I drew in the main lines and blocked in the sky and foreground areas in pale blue and green. This morning I got the sky in first with fingers initially and then used a knife to get a bit more definition in the clouds. I got the outline of the far trees in by stippling with a small knife using a mixture of Sap Green, Pthalo Green and Prussian Blue. The foreground and the pond in particular were the biggest challenge and I decided to use my wedge to move the colours around and create the plants both by laying down spikes of colour and drawing out shapes from the darker areas. I used the edge of the wedge to suggest the fence and a small knife to suggest windows, drain pipes etc. Hardest thing was making the pond look like a pond rather than a field. I again used the wedge to create some of the interesting shapes and shadows in the water and resorted to a smudge of light blue to hopefully reflect the sky in the water. Finally I flicked on spots of white and Naples yellow to suggest flowers and seed heads. The painting is in acrylics on a 12" by 10" canvas board."

Next is a Watercolour by Jan Harris....

Irene Hardy's contribution is next.....

IRENE: "Just to say I really enjoyed LMOP yesterday - it was the impetus I needed to get my paints out again!"

Thanks to all those who took part in the 'live' Zoom session. Now here are two fantastic pastel contributions from Blanche Lee who worked offline.

This interpretation (above) from Kate Gendle, created in the app Procreate....and the one below a very original design in felt tipped pen and pencil.

The following two fused glass pieces (below) were begun during the 'live' Zoom session. Here is Jude Howe to explain the process of producing 'Reeds and Rushes', the first image.....and 'Elements' the second.

When I saw the image of the farm I was immediately drawn to a small area of the pond.

My aim initially was to produce 'Reeds and Rushes', a fairly figurative representation in fused glass. Some of the glass I used was iridised, which captured the light I wanted beautifully but I found that the figurative approach I had taken was a bit too prescriptive for me.

I took a step back and considered what it was that had inspired me.

I was mainly drawn to the interaction between the diverse colours of the  reeds and the light on the water.  I allowed myself to move purely into abstraction focussing on these elements - an approach which lent itself to working with transparent glass.

So, although the piece no longer said 'pond', I was very satisfied with the outcome and I love the interplay between the component parts of the work, which I think look quite majestic. This second piece is entitled 'Elements'

'REEDS & RUSHES' (Above) by Jude Howe

'ELEMENTS' (Above) by Jude Howe

Now we move onto Wednesday 18th November 2020 and the image we all had to interpret in any medium we liked. First, we have the seascape image provided by Jude Howe.

The first to upload her artwork (below) was Judy Flanagan with her beach scene in pastel on brown sketch paper.....followed by her version in Acrylic, and a photo of both works side by side.

Thanks to Judy for sending the images so quickly.....and it's amazing to think both these interpretations were created 'live' on Zoom within the two hour session. Fantastic.

Now (below) we have two 'offline' pieces of artwork by Blanche Lee.

Here are two efforts I did this morning. The first one is acrylic on board which I shall probably do a bit more work on, and the second is a 10 minute sketch on my tablet. I will probably do another one based on my tablet sketch......

Next contibution to arrive on the day is this acrylic (see below) from Stan Pile.

"An amazing two hour session, the time just whizzed by. I haven't felt that level of concentration since life drawing at College.

Before I began I had some idea of how to approach the painting but once started it seemed to take me in quite a different direction.

It reminded me of the words of Jackson Pollock 'I sometimes lose a painting but I have no fear of changes because a painting has a life of it's own.'

I worked with acrylic on canvas. I started with a palette knife to block in large areas then reverted to sponges and fingers, finishing off with a small brush."

This version (above) was created during the 'live' Zoom session by Jane Lodge.

And now (below) two contributions from Janet Stott. One watercolour and one pastel sketch.

Two more paintings created during the 'live' Zoom session (below), this time from Selina Fennell.

We now have this beautiful creation (below) in fused glass from Jude Howe.....

JUDE: "This fused glass Beachscape had 3 firings; a previously prepared full fuse, a tack fuse created during the session and finally a slump onto the 20cms x 20cms platter mould,

The reflective quality of the glass lent itself to the image but the piece is more stylised with less fine detail than the amazing works created with pastel and paint."

Reflections on the Beach (above) by Phil Hargreaves. Oil on board, 80cms x60cms.

For our third session on 2nd December we had the image below to work from....supplied by Selina Fennell.

The first artwork (below) from the 'live' Zoom session is from Jane Lodge.

Next (below) is a pastel version by Blanche Lee, created offline on the same morning.

Phil Hargreaves pastel artwork (above) was also created offline. He had this to say "Managed to get this done this afternoon. It's my first ever pastel."

Fused glass (above) creation by Jude Howe. Jude had this to say "Here is my latest LMOP before being tack fused. I seem to try to be more figurative than is my usual style, it must be being with painters.

I was reminded of the lovely bright winter Cornus hedges that we see on the main road to Beverley, so went with these colours as a contrast because my palette is more limited using glass."

Stan Pile produced the painting (above) during the 'live' session on Zoom. Stan had this to say..."Really enjoyable exercise again, intense concentration over 2 hours. Worked in acrylic building several textured layers. Lovely image to work with."